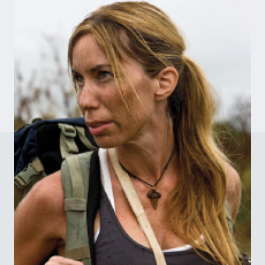 Dr. Mireya Mayor—known as the “Female Indiana Jones”—is an anthropologist, author, TV correspondent and National Geographic Explorer. A Fulbright Scholarship launched her into fieldwork, and she went on to become a National Science Foundation Fellow and earn her Ph.D. from SUNY Stony Brook, where she was named a Top 40 under 40. Mireya has spent most of her career reporting on wildlife and habitat loss, while advocating for solutions to the alarming trends that are shrinking our wild spaces and contributing to the decline in wildlife health and abundance. Her specialty is primates and the preservation of habitat in the highly fragmented forest regions of Madagascar, where she co-discovered the world’s smallest primate, a tiny mouse lemur. Mireya was the first Latina wildlife correspondent for National Geographic, and she has earned two Emmy Award nominations for her work. She has starred in various TV shows, including the current Expedition Bigfoot (The Travel Channel). Her book, Pink Boots and a Machete: My Journey from NFL Cheerleader to National Geographic Explorer, chronicles her unconventional career path. This Miami native, daughter of Cuban immigrants, and mother of six is also the Director of Exploration and Science Communication at Florida International University. Motivated to share her passion for science and conservation, Mireya lectures regularly around the world to a wide variety of academic, corporate, and general audiences.