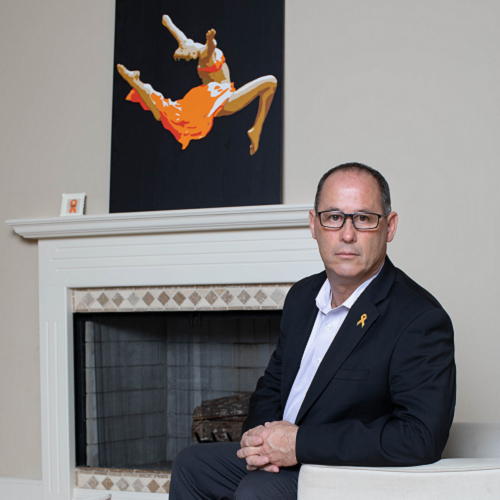 Fred Guttenberg’s professional life includes over a decade of experience in sales and management with Johnson and Johnson, followed by almost 15 years as an entrepreneur, having built a business that consisted of 19 Dunkin Donuts, which he sold in November 2016. Fred was hoping to take some time to relax before figuring out his next endeavor. Then tragedy struck.

Fred’s brother Michael was one of the original first responders during 9/11 at the WTC. Michael was with a team of doctors who got trapped in the WTC as it collapsed. Amazingly, the room that they hid out in did not collapse and Michael and his team of physicians spent 16 days at ground zero taking care of others. As a result of the ground zero exposure, Michael was diagnosed with pancreatic cancer which he battled, along with Fred’s help and support until October 2017, when he passed away.

Following Michael’s funeral, Fred understandably still trying to recover from the passing of his brother also recognized he needed something else to do. In February of 2018 he was actively looking for a new purpose when Fred and his family were again struck by another National American tragedy; only this one was far worse. His 14-year-old daughter Jaime, a freshman at Marjory Stone Douglas High School was one of 17 victims brutally murdered in the Parkland Florida school shooting.

From that day forward, Fred’s life would be forever changed. While grieving, Fred found himself unable to stand still. The day after the murder, he attended a vigil and while there was asked to speak. That was the start of a new public life for Fred. He was angry and quickly realized his new purpose as an American advocate in the fight for public safety.

Fred now spends time challenging our elected officials to do more and he is aggressively pursuing strategies to enhance public safety, enact common sense gun safety and turn out the vote through his non profit organization dedicated to Jaime’s life called “Orange Ribbons for Jaime”. He has been a regular on TV news programs and myriad of online and print media. Through the formation of the non-profit, this is now his full time mission. Fred’s leadership and perseverance in spite of these dual tragedies is and his ability to turn the worst possible grief into action and to attain ongoing results is now nationally known.

Fred Guttenberg moved to Florida from Long Island in 1989 shortly after graduating from Skidmore College in New York in 1988. Fred, his wife Jennifer, and their son Jesse currently reside in Parkland, Fl.