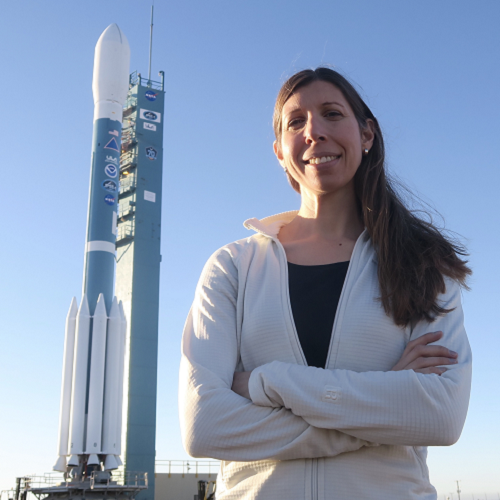 Kerri Cahoy is an Associate Professor in Aeronautics and Astronautics at the Massachusetts Institute of Technology. Kerri leads the Space Telecommunications, Astronomy, and Radiation (STAR) Laboratory, and design, builds, launches, and operates shoebox-sized satellites called CubeSats.

CubeSats are changing our relationship with space, in particular, changing how fast we can update and improve our weather forecasts. With the rocket ride-shares for CubeSats costing about one thousand times less than before, it is possible for anyone to design and build their own satellite and get it into orbit. Because CubeSats are shoebox-sized, they have limited power, mass, and volume, but in the twenty years since they were invented, CubeSat systems can generally accomplish the same functions as much larger and more expensive satellites. This means that we can launch a lot of them for a reasonable cost, which we cannot do for larger satellites.

Kerri works with CubeSats to improve hurricane tracking using an instrument called a microwave radiometer. A microwave radiometer can measure atmospheric temperature, even through clouds and precipitation. Her team flies miniature microwave radiometers on CubeSats and has shown that they work as well as larger and more expensive satellites with the Microsized Microwave Atmospheric Satellite (MicroMAS-2A). The next step is to go from only having one CubeSat in orbit to several, so that they can fly over the same location more often, like every fifteen minutes instead of only two or three times a day. These more frequent measurements will help weathermen do a better job of predicting hurricane tracks and intensity.